We have made no distinction between devout religious pilgrims and secular tourists. Most of these sacred sites are free and open to the public. You don’t need to have faith to be drawn to these temples, churches, and shrines, popular for their spiritual and cultural value. 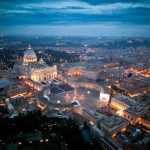 St. Peter’s Basilica, Vatican City, Rome
One of the world’s largest sacred buildings and one of the holiest of Catholic sites, the basilica teems with ornate gold, marble columns, paintings of angels, iconic statues, and works created by a who’s who of Renaissance artists—including Raphael, Brunelleschi, Bernini, and Michelangelo, who sculpted the marble Pietà and designed the basilica’s massive dome. vaticanstate.va
In Italy you can also visit:
Shrine of Padre Pio, San Giovanni Rotondo
St. Mark’s Basilica, Venice
Basilica of St. Francis of Assisi

ISRAEL
Western Wall, Jerusalem
One of the holiest sites in Judaism is a 187-foot-long stone-block bulwark, the last remaining section of the retaining wall surrounding the courtyard of the Temple Mount begun by King Herod in 20 B.C. and destroyed by the Romans in A.D. 70. Women and men have separate areas of worship along the wall (also called the Wailing Wall and the Kotel), and they must wear particularmodest clothing. english.thekotel.org

In Israel you can also visit:
Church of the Holy Sepulchre, Jerusalem
Basilica of the Annunciation, Nazareth
Temple Mount, Jerusalem
Baha’i Shrine and Gardens, Haifa 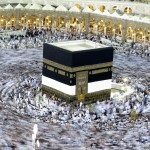 Al-Haram Mosque, Mecca
The Black Stone, Islam’s holiest relic and a venerated icon long before Muhammad’s time, is enshrined in the Kaaba (or Ka’ba or al-Ka’bah), the five-story-tall, cube-shaped granite building in the mosque’s plaza. It is toward the Kaaba that Muslims pray five times a day, and Muslims are supposed to make the pilgrimage to Mecca at least once in their lives. saudiembassy.net

This temple with its two golden domes sits on the western bank of the Ganges River and, with the Ganges, is the most holy site for all sects of Hinduism. Believers bathe in the river to cleanse their souls and reduce or eliminate the need to be reincarnated. Recently the government has worked to improve the quality of the water, where many millions also make offerings of flowers, food, and floating oil lamps. shrikashivishwanath.org
In India you can also visit:
Tirupati Tirumala Devasthanams Temple, Andhra Pradesh
Lotus Temple, New Delhi

TIBET
Jokhang Temple, Lhasa
Part of the UNESCO World Heritage Site that includes Potala Palace, this holiest of Tibetan Buddhist temples draws pilgrims who prostrate themselves in front and spin golden prayer wheels inside. Built in 647 by King Songtsen Gampo, who unified Tibet, the four-story temple houses a myriad of chapels to gods and bodhisattvas, yak-butter votive candles, incense, and an ancient, jewel-covered, gilded statue of the Buddha called the Jowo Rinpoche. chinaodysseytours.com 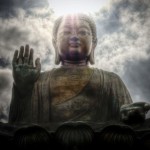 Po Lin Monastery and Tian Tan Buddha, Hong Kong
The 85-foot-tall seated “Giant Buddha” on the Ngong Ping plateau of Lantau Island serenely surveys the surrounding lush mountains and raises his right hand in blessing to the visitors who climb more than 200 steps to reach the statue’s base. Cast in bronze, the statue took 12 years to make and was unveiled in 1993. The nearby Buddhist monastery, decked out in vivid reds, oranges, and yellows with icons to various gods, serves vegetarian lunches. discoverhongkong.com 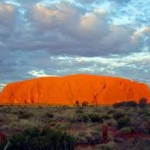 Uluru (Ayers Rock)
Uluru is a massive sandstone rock in central Australia that is sacred to the Aborigines of the area, who are known as the Anangu. In recent years, Uluru has also become important for New Age practitioners.
Believed to have been formed by the activities of ancestral beings in creation time (or Dreamtime), the beautiful site includes many caves, waterholes, and ancient rock paintings. uluru-australia.com

MEXICO
Basilica of Our Lady of Guadalupe, Mexico City
The Old Basilica, begun in the 1500s and completed in 1709, stands in stark contrast to the massive new basilica that was built in the mid-1970s and looks like a sports arena. It is, in fact, designed to hold 50,000 people, who come for mass—celebrated several times daily—and to see an image of the Virgin Mary that is said to have appeared on an apron in 1531. sancta.org

← Giro del Mondo Classico
Around the World by Private Jet →