RTW Ticket: from £ 2000
Land services to be quoted apart.

A world tour that will take you to the heart of the Pacific Ocean, to the wonders that Mother Nature has bestowed on this amazing part of the planet. And if that were not enough, the possibility of two other legendary stops in California and in glittering Hong Kong. 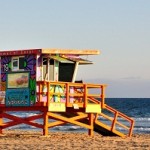 The Old World is well represented in this itinerary by what could be called its modern capital, London. It’s no coincidence that the city, which has recently had a facelift due to the 2012 Olympics, has become the European hub for intercontinental flights.

CALIFORNIA
Even if you only have a few days, Los Angeles and San Francisco have a lot to offer to even the most demanding tourist. Hollywood, Venice Beach, Malibu, Santa Monica, Beverly Hills, Golden Gate Bridge, Fisherman’s Wharf, Alcatraz, Lombard Street…remind you of anything?
It’s also possible, if you wish , to insert an “overland” that will allow you to visit both cities (landing in one and departing from the other) and cover one of the most spectacular roads in the United States, the Pacific Coast Highway. 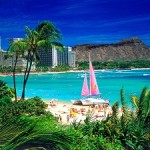 HAWAII
Visiting this lush sun-kissed archipelago is undoubtedly an unforgettable experience. Beaches with crystal clear waters, ideal for snorkeling, alternate with stretches of coastline with majestic waves where professionals ride the surf. Skeletal forested mountains (remember Jurassic Park? It was filmed here!), hidden waterfalls, green valleys and volcanoes spewing their magma into the ocean. The relaxed atmosphere of the inhabitants and the variety of landscapes that you will encounter leave no doubt…this really must be heaven on earth! 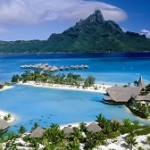 FRENCH POLYNESIA
French Polynesia is one of the most popular destinations for lovers of the sea and you really can’t blame them! The international airport is located on the island of Tahiti featuring wild mountains, turquoise seas and a lively capital city, Papeete. Among the many beautiful atolls, all worth a visit, we must recommend what is considered one of the most precious pearls of the Pacific, Bora Bora. The setting for countless films, Bora Bora embodies the legendary image of the South Seas…a mountain encircled by a spectacular coral reef !

COOK ISLANDS
The Cook Islands, also known as “New Zealand’s Polynesia” constitute a small and remote archipelago of 15 islands in the middle of the Pacific Ocean. A must for the priceless natural heritage that includes not only sun, sand and sea, but also green mountains waiting to be discovered… breathtaking backdrops, mysterious caves and tropical fish of all kinds complete the picture. 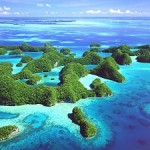 FIJI
The Fiji archipelago consists of around 322 islands of which only 110 are inhabited. The majority of the islands, rich in lagoons, coral reefs, forests and mountains, as well as sandy beaches, are of volcanic origin but no longer with an active crater.
The most popular islands are located in the archipelago of Mamanucas , not far from the main island and home to the Nadi International Airport. Their wild beauty was immortalized in the film Castaway, starring Tom Hanks. The archipelago of Yasawa, a little further away but easily accessible by fast catamaran, includes the most exclusive islands, such as Turtle Island and Yasawa . 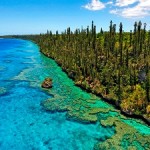 New Caledonia owes its name to Captain James Cook, who noted many similarities with Scotland (Caledonia being Scotland’s original name). Still ruled by the French, it consists of the main island Grande Terre, (whose capital Noumea is home of the international airport) and small islands that surround it such as Lifou, Maré and Ile des Pins; all characterized by extraordinary beaches protected by a 1,600 km long barrier reef, which stretches for 22 thousand square kilometres, the largest in the world. Due to its isolation, an authentic biological diversity has been preserved: of the 3,400 living plants 2,500 only grow here. The Grande Terre is the largest island and the most populated, while the Isle of Pines, only 70 km and a 40-minute flight away, is rich in atmosphere, characterized by long white and pink beaches, blue turquoise lagoons and green pines. The choices that New Caledonia offers visitors are therefore vast: from diving along the reef to dinners à la Français , from trekking through the primeval rainforest to the atmospheric Côte d’Azur in the capital. 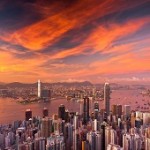 Inhabited since the second century BC by Chinese fishermen, Hong Kong was the haunt of pirates and smugglers of opium in the following centuries, until the arrival of the British in the nineteenth century. During the twentieth century, thanks to a major fiscal policy, Hong Kong became the main economic centre of Asia. This urban anthill, ever expanding both vertically and horizontally, still maintains its characteristic attractiveness and magnetism. Shaped by a multitude of skyscrapers, host to fantastic hotels, award-winning restaurants, luxury shops – and much more – the New York of Asia is buzzing, day and night – creating an irresistible intoxicating dizziness!>

← Travel 7 Wonders of the World
The Great Classic →