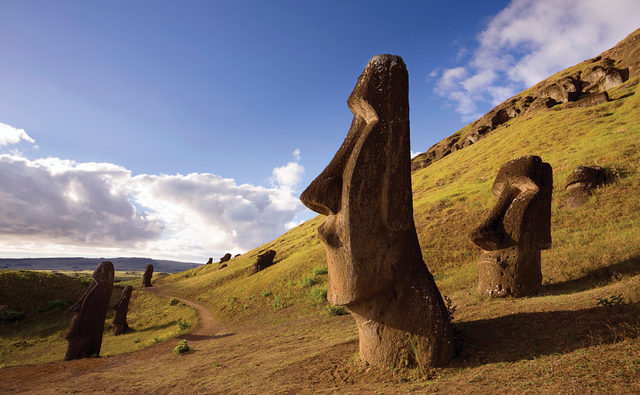 Circle the globe with top National Geographic experts on a once-in-a-lifetime adventure. Traveling in the comfort of a private jet, encounter legendary places from Machu Picchu and Tibet to the Taj Mahal and Marrakech. Experience natural wonders such as the Great Barrier Reef, the Serengeti Plain, and the island paradise of Samoa.

We begin this extraordinary adventure with a welcome reception at National Geographic Society headquarters, followed by dinner at our hotel.
The Hay-Adams, Washington, D.C. (D)

This morning, our private jet takes us to Lima, where we take a local flight to charming Cusco (11,200 feet). Explore the imposing cathedral in the Plaza de Armas, considered by many to be one of the finest combinations of Spanish Renaissance style and legendary Inca stonemasonry. Marvel at the treasures of the Pre-Columbian Art Museum, where we will meet with National Geographic grantee and master weaver Nilda Callanaupa, who works with traditional weavers throughout Peru to preserve the rich textile arts.

Discover the remains of the great fortress Sacsayhuaman overlooking Cusco, where enormous blocks of stone—some weighing more than 200 tons—were used to build the walls. Assembled without the use of mortar, the blocks fit together so tightly that a knife blade cannot be inserted between them.

Then travel by train to Machu Picchu, passing through the spectacular Urubamba Valley, known as the Sacred Valley of the Inca. Still clouded in mystery, Machu Picchu was abandoned by the Inca and lost to history until it was rediscovered by American explorer Hiram Bingham in 1911 and excavated with support from the National Geographic Society. Examine the artfully cut stone altars, temples, foundations, staircases, and terraced gardens that make this one of the world’s most extraordinary archaeological treasures.
Belmond Palacio Nazarenas, Cusco (B, L, D daily)

Alternative: Instead of visiting Cusco and Machu Picchu, head to northern Peru to visit the temples of Trujillo and Chiclayo, where the richest burial chambers in the Americas were discovered. See where the ancient Moche and Chimu peoples lived, and explore Chan Chan, the largest adobe city in the world.
Libertador Trujillo (B, L, D daily)

Fly to Easter Island, located 2,300 miles off the coast of Chile. Scattered with mysterious, colossal stone statues called moai,the island is an open-air museum of the ruins of a lost culture. The island has been a subject of debate since it was first seen by Europeans on Easter Sunday in 1722. How did its native people first arrive? What transpired over the centuries? What do the tall, brooding statues mean? Learn the hidden stories of the island’s wonders with renowned archaeologists, and marvel at the many moai that dot the island’s windswept landscape. Along the way, discover the ancient ceremonial centers, volcanic craters, petroglyphs, lava formations, and fascinating clues to the Orongo birdman cult. Then enjoy a splendid performance by the Kari Kari Rapa Nui dance troupe.
Hangaroa Eco Village & Spa (B, L, D daily)

From Easter Island we continue our voyage across the Pacific, crossing the international date line. We lose a day en route and arrive in Samoa the following evening. (B, L, D)

Samoa is one of the few places where pure Polynesian culture remains essentially intact—tribal rituals and hierarchies are little changed from ancient times. This beautiful island world is well known for its hospitality, traditional ceremonies, and distinct communal customs (known as fa’a Samoa, or “the Samoan way”). Enjoy a fia fia—a colorful performance of Samoan dance and song.
Sheraton Samoa Beach Resort (B, L, D)

Fly to Cairns and transfer to the charming seaside town of Port Douglas. Explore the Great Barrier Reef, the largest known coral reef in the world and home to an exceptionally rich variety of marine life. Snorkel among rainbow-colored corals with schools of unicornfish, surgeonfish, bumphead parrot fish, and sea turtles.

Or discover the natural wonders of the Daintree, a rain forest that is approximately 90 million years older than the Amazon rain forest. Go on a Dreamtime walk in Mossman Gorge with an aboriginal guide, a member of the Kuku Yalanji, who will share his people’s legends and take you to sacred sites.
Pullman Port Douglas Sea Temple Resort & Spa (B, L, D daily)

Fly by private jet to Siem Reap, our base for exploring Angkor, the heart of the ancient Khmer Empire. Delve into the magnificent Angkor Wat temple complex, one of humankind’s greatest architectural triumphs; and discover the massive towers, carved murals, colonnades, and courtyards that exemplify classic Khmer architecture. At Angkor Thom, explore the Bayon Temple and the Terrace of the Elephants. Then set out on a cruise to nearby floating villages on Tonle Sap lake (water levels permitting), or explore the temple of Ta Prohm, still tangled in the thick roots of banyan trees. In the evening, enjoy a classical Apsara dance performance during dinner at our fine hotel.

Alternative: Instead of Angkor Wat, explore the lost jungle temple of Beng Mea Lea (water levels permitting), among the largest Khmer temples, and the ninth-century Roluous temple complex of Hariharalaya, the first capital of the Khmer Empire, which predates Angkor Wat by some 300 years.
Raffles Grand Hotel d’Angkor (B, L, D daily)

Fly by private jet to Kathmandu and visit the medieval city of Bhaktapur, once a royal capital whose stunning pagodas, palaces, and squares still captivate today. Then enjoy dinner and a night’s rest before departing for Tibet.
Dwarika’s Hotel, Kathmandu
(B, L, D daily)

This morning, take a local flight to Lhasa, Tibet’s capital, located on one of the world’s highest plateaus. Once a “forbidden city,” this Himalayan center of Buddhist pilgrimage—with the spectacular Potala Palace dominating its skyline—still retains a mystical atmosphere. Visit the Jokhang Temple, the region’s oldest and most revered; and explore the colorful Tibetan markets, known for their finely crafted ornaments, rugs, religious paintings, and carvings. The next day, venture into Potala Palace, a highlight of our time in Lhasa. The palace, with its hundreds of rooms, lavish decor, and labyrinthine corridors, was once the winter residence of the Dalai Lama and served as the seat of the Tibetan government for more than 300 years. Stop by the nearly 600-year-old Sera Monastery, where we may see monks in the debating courtyard. You may also visit the Tibet Museum or a local nunnery.
St. Regis Lhasa Resort (B, L, D daily)

Alternative: Instead of exploring Lhasa, visit the World Heritage-listed Pashupatinath Temple on the outskirts of Kathmandu. Then board a local flight to Chitwan National Park, one of Asia’s premier wildlife reserves. Venture into the park with a naturalist in search of a variety of birds and mammals, including elephants, leopards, sloth bears, and rare one-horned rhinos. You may also opt to visit a local village, canoe along the peaceful Rapti River, or take a guided walk through the forest. Celebrate with a Nepali barbecue dinner and a traditional dance performance. Rejoin the rest of the group in Kathmandu before departing for India.
Taj Meghauli Serai Lodge (B, L, D daily)

Return to Kathmandu by local flight and continue on our private jet to Agra. Discover the iconic Taj Mahal, built in the 17th century by Shah Jahan as a tribute to his wife, Mumtaz Mahal. A masterpiece of the Mogul empire, the monument soars majestically above the banks of the Yamuna River. Wander the site, admire its form among the reflecting pools and gardens that surround it, and examine its intricate mosaics made of precious stones. In the afternoon, you may explore the imposing sandstone Red Fort of Agra, where Mogul emperors lived in splendor. Or you may choose to venture into Kachhpura, a village in Agra inhabited by the Harijan people, otherwise known as “untouchables.” Meet with local families and visit a school. If you wish, rise early to join our National Geographic photographer to capture images of the Taj Mahal at sunrise.

Alternative: Instead of visiting the Taj Mahal, explore Fatehpur Sikri, Emperor Akbar’s crowning architectural achievement, an exquisite red-sandstone city that served as the Mogul capital from 1572 to 1585. Stroll through well-preserved pavilions, courtyards, tombs, and palaces—most notably the emperor’s private quarters, a “palace of dreams” richly decorated with Persian calligraphy and murals.
The Oberoi Amarvilás (B, L, D daily)

Fly by private jet to Kilimanjaro International Airport and transfer to a smaller aircraft for the flight to Serengeti National Park. In the local Maasai language, Serengeti means “extended place”—an appropriate name for this vast wildlife sanctuary, which is one of the most complex and least disturbed ecosystems on Earth. Go deep into the savanna to witness Africa’s greatest concentration of wildebeests and zebras, as well as lions, cheetahs, and leopards.
Four Seasons Safari Lodge Serengeti (B, L, D daily)

Alternative: Instead of exploring the Serengeti, descend into the Ngorongoro Crater to observe the permanent population of almost 25,000 animals in one of the largest unbroken calderas in the world. Along with herds of wildebeests, gazelles, and zebras, we may also see the “big five” (rhinoceroses, lions, leopards, elephants, and buffaloes). Spend your nights here at a well-appointed lodge perched on the crater’s rim. During our stay, travelers will have the opportunity to meet either Meave or Louise Leakey, both National Geographic Explorers-in-Residence whose family of renowned anthropologists has discovered many important fossils in the area.
Ngorongoro Crater Lodge (B, L, D daily)

Situated between the Red Sea and the Dead Sea, Petra was settled by the enigmatic Nabataean people in 312 b.c. and became an important crossroads between Arabia, Egypt, and the Levant. The Nabataeans disappeared mysteriously, but the nomadic Bedouin civilization remains to this day. Half built, half-carved into rose-red sandstone cliffs, Petra is undoubtedly one of the world’s most impressive architectural achievements.

Step back in time 2,000 years as you stroll this ancient city, and learn why these enigmatic people built their capital in such an inaccessible spot. Enter the Siq, a dramatic opening in the brilliantly hued bedrock; and arrive at the Treasury, Petra’s most exquisite edifice. Discover many other elaborately decorated buildings and tombs chiseled from sheer rock walls, and observe up close the superb blending of Eastern traditions with Hellenistic architecture. On our last evening, gather for a festive Bedouin dinner.
Mövenpick Petra, Jordan (B, L, D daily)

Alternative: Instead of exploring Petra, travel to Wadi Rum, a beautiful desert landscape made famous by T. E. Lawrence and the film Lawrence of Arabia. See the spectacular rock formation known as the Seven Pillars of Wisdom, and enjoy a traditional mansaf meal prepared by local Bedouin villagers.

Fly by private jet to Marrakech where we explore this fabled city, located in an oasis of palm and olive groves, and steeped in ancient Berber tradition. See the Koutoubia Mosque, Ben Youssef Madrasa, and the grand Bahia Palace. Wander through the medina, a jumble of colorful suqs; and stroll the Djemaa el Fna, a lively square where snake charmers, acrobats, and magicians enchant the passsersby. If you wish, immerse yourself in the lush blue-and-green paradise of the Majorelle Garden, a delightful combination of traditional Moroccan architecture, Islamic art and artifacts, rare plants from five continents, and North African birds. On our last evening, celebrate our adventure at a farewell banquet with traditional entertainment.

Alternative: Instead of exploring Marrakech, spend the day in the spectacular Atlas Mountains, the highest mountain range in North Africa. Visit a Berber village, share tea with a village elder and his family, and enjoy a delicious picnic lunch. In the evening, rejoin the group in Marrakech for our farewell dinner.
La Mamounia (B, L, D daily)

Following breakfast, board our private jet and fly to Washington, D.C. Upon arrival, you may connect with your commercial flight home, or, if you wish, we will provide complimentary accommodations at the Hyatt Dulles Airport Hotel for the night. For the January, March, and December departures, which end in Orlando, complimentary accommodations will be provided at the Hyatt Regency Orlando International Airport Hotel for one night. (B, L)