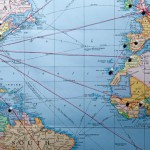 RTW itineraries: The classic (and cheapest) RTW tickets flit between a few big cities, for example London — Bangkok — Singapore — Sydney — LA. If you want to link more offbeat hubs (Baku — Kinshasa — Paramaribo, anyone?), prices will climb considerably. The cost of the ticket is based on the total distance covered or the number of countries visited.

Remember, you don’t have to fly between each point: in Australia you could land in Perth, travel overland, and fly out of Cairns. Or fly into Moscow, board the Trans-Siberian train, and fly onwards from Beijing.

Pick some personal highlights and string the rest of your itinerary around those. For instance, if you’re a keen trekker, flesh out a Peru (Inca Trail), New Zealand (Milford Track) and Nepal (Everest Base Camp) itinerary with Brazil (Rio’s a good access point for South America), Australia and North India.

If budget’s an issue, spend more time in less expensive countries. Your daily outgoings will be far higher in Western Europe and North America than South-East Asia; Indonesia, Bolivia and India are particularly cheap.

← Viaggi RTW offerte
WHEN to go? →